Prior to 1837 The Government relied on The Church to register it’s population but it realised that it was not a complete record so a single tier registration system was introduced and all births, marriages and deaths had to be registered 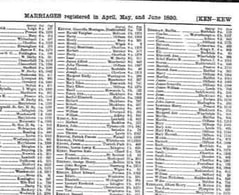 All births, marriages and deaths are recorded in an index. You need the details from the index before ordering the certificate
Introduction

Civil registration - the need for births, marriages and deaths to be recorded in England & Wales  - commenced on 1 July 1837. In Scotland records began in 1855 and in Ireland in 1864 although Irish non-Catholic marriages were recorded from 1845

Prior to 1837 The Government relied on The Church to register its population but it realised that it was not a complete record so a single tier registration system was introduced. The Registration Districts are based upon the old administrative poor law unions which had been set up in 1834, and prior to that the administrative hundreds.

The Act also permitted marriages to be performed in Register Offices and not necessarily in the Anglican Church (as many Nonconformist Chapels were authorised to perform marriages).

Although Civil Registration was introduced in 1837, it was not until 1874 that the registration of a birth became compulsory. Between these dates, children may not have been registered.
The information contained in each certificate is as follows 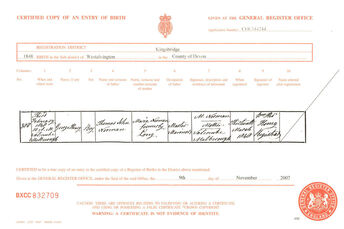 The information recorded on a birth certificate is : Civil Births on Find My Past 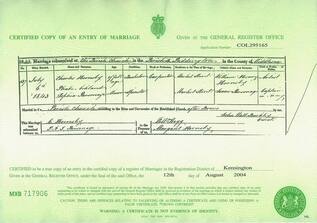 The address on  a birth certificate can help find the family in census returns, directories and poll books and other records

​An address might be given for both parties but that doesn’t mean they were both living in the same house as it was often used to avoid paying for two sets of banns fees.
Civil Marriages on Find My Past 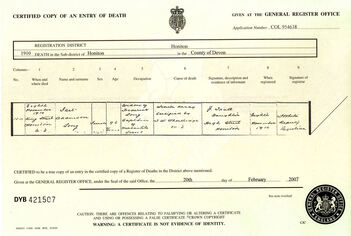 Death Certificates
From 1837, only the date and place of death, name, age, sex, occupation, and cause of death was required. From the mid 1969, information shown includes additionally, date and place of birth, usual address and if the deceased was a married woman, her maiden name.  All of which is extremely useful to the family historian..
Using the Civil Registration System

It is not possible to see the actual certificates immediately and not online. To receive a certificate from the GRO (usually through the post) you must discover the reference details for each event you require.
The birth, marriage or death is indexed nationally. It is maintained in alphabetical order, by year and then by the quarter during which the registration of the event took place. So you will need some basic information before you can order a certificate.

A birth had to be registered within 42 days. As an example if an event took place on 26th September, it may not have been registered until October  that year. So the event will appear in the December quarter A death had to be reported within 5 days so that is likely to be included in the index volume for the quarter in which the event took place.
The marriage indexes record both the  groom’s and the bride’s name.

All of this is irrelevant if you are going to obtain a certificate from a local register office. They will need the name , date of event and other personal details.
Search the index by name on Ancestry
Research your family history using the General Register Office

Advice and help at the Society of Genealogists

Free BMD is a site which has been transcribing the Civil Registration index of births, marriages and deaths for England and Wales for free