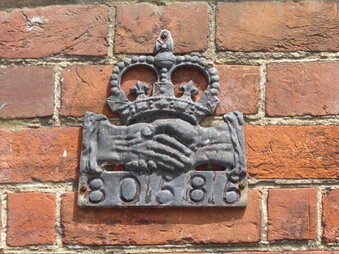 Fire insurance marks were metal plaques marked with the emblem of the insurance company which were affixed to the front of insured buildings as a guide to the insurance company's fire brigade.
Records of Fire Insurance Companies are a great source for house historians.
Most insurance companies became established just  after the Great Fire in 1666. Probably the most famous - the Sun Fire Office  began in 1710.
Here you will find names of policy holders who insured their property against fire, all recorded in the policy registers.
Maps and plans were often commissioned by the fire insurance companies and it is worth looking these up. The most notable company providing  plans were Charles E. Goad who worked from the mid 1880s. However Goad Maps were mainly surveyors of  retail and business premises but well worth a look to see if your house was on one of these maps. Helpfully these have separate indexes covering street names,buildings and businesses. Goad’s plans started in the London area but by end of the 18th century the industry had spread to the provinces. Even today you can still see fire marks which were placed on buildings to show that they had been insured by private companies. ​
Another source is the ‘A Place in the Sun’ project aimed at indexing the  early 19th century Sun Insurance Office Fire Policy Registers which had been transcribed by volunteers from The National Archives and the London Metropolitan Archives. Read more about this here
You can find out more at the British Library,
County Record Offices
or Aviva Archive
Welcome    The House. The Stories  The People    1939 Register      Books & Histories     Census
Church and Glebe Records.      Civil Registration     Council/Borough Records
Court Records.   Directories    Enclosures     Griffiths Land Valuation.     Inquisitions Post Mortem   Insurance Records
​Manorial Records   Other Records     Maps   National Farm Register   Newspapers    Photos.    Postcards
Private Estate Records.    Probate & Wills     Rate Books     Sales Particulars    Scottish Land Valuation.     Tax     Telephone Books.   Land Tax.    UK House Guides   Valuation Survey