These records  consist of  ‘court rolls, surveys,maps, terriers, documents & books  relating to the boundaries, franchises, wastes, customs or courts of a manor. 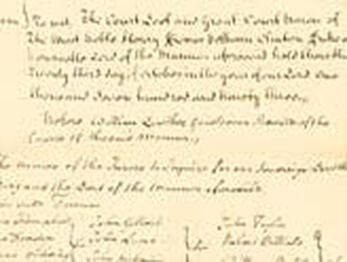 Manorial records are the documents created by landed estates called manors.  The types of document coming under the definition of 'manorial documents' include: ‘court rolls, surveys, maps, terriers, documents and books of every description relating to the boundaries, franchises, wastes, customs or courts of a manor.

The manorial system in England and parts of Wales touched much of the population until well into the seventeenth and eighteenth centuries. Information produced by manorial courts, operated in many areas until the early years of the 20th century.

This can provide valuable information regarding the transfer of land and property. By far the most common form of tenure dealt with by these courts in England was copyhold, and where records survive, much of the information to be found deals with copyhold tenants and their holdings. However information about freehold and leasehold properties can also often be found in documents including details about  rentals and surveys
Sometimes Lords of Manors also had the right to deal with certain minor criminal matters and regulate the sale of bread and ale.

So documents from these courts provides lots of information about the management of estates and commons. For urban manors details can also be found about markets, trade and industrial developments. This provides a valuable insight into the community living on the manor, its social structure, households and the local economy

The location of large numbers of surviving manorial documents is recorded in the Manorial Documents Register.

​The register is arranged by county then by manor. Parts of the register, at present covering the whole of Wales, Yorkshire,
Hampshire, The Isle of Wight, Norfolk, Dorset Hertfordshir,e, Nottinghamshire , Shropshire, Surrey, Middlesex, Cumberland , Westmorland, Lancashire North of the Sands (part of Cumbria since 1974),Berkshire and  Buckinghamshire,  have been computerised and can be consulted online.

A paper register, which covers the remaining English counties, is on open access in the National Archives' Map and Large Document Reading Room at the National Record office in Kew.

Where can I find out more?

Go to top of page