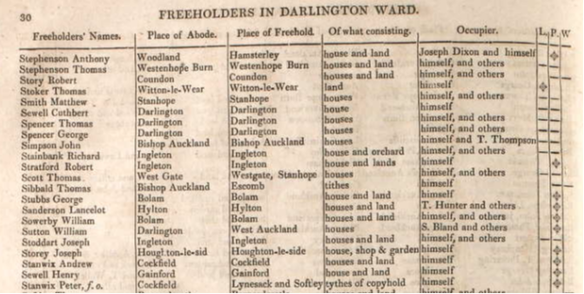 Poll books were introduced following a 1696 Act of Parliament  which attempted to end disputed election results as well as fraud. The Act led to a list of voters and the candidate they voted for in County Elections to be drawn up. These were then published as poll books and were used in various elections until the secret ballot was introduced in 1872.
Not all residents will be listed in Poll Books. Until 1832 only voters who were freeholders, plus a few others who could meet property requirements were listed and then only those that actually voted.

What you will find in Poll Books are names, addresses, occupations and the way that the elector voted in the election.
In 1872 the secret vote was introduced and so the way a person voted was no longer available to the public and poll books were no longer necessary. 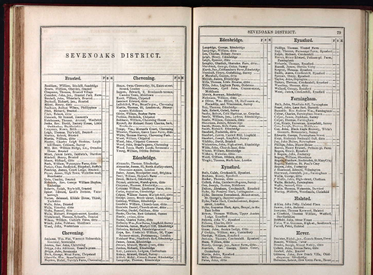 Meanwhile, Electoral Registers were first introduced in 1832 and these became the record of the way a voter behaved. The register contains details of all those who qualified to vote, their address and details of their property which enabled them to qualify (before 1918).

Electoral Registers for England & Wales, include 4 types of register:
Electoral Registers contain lists of names of the people entitled to vote. These lists which were created each year, set out the names of those who were eligible to vote with their reason for eligibility, such as their residence or ownership of a property.
The period covered by the registers is one of quite dramatic changes to the way that the British Electorate voted. During the 19th and early 20th centuries the vote was gradually given to more and more people and was eventually extended to working class men and thanks to womens‘ suffrage, finally to women
​The registers can therefore help us to discover the time that men and sometimes other adult members of a family lived at a certain address. From 1918, and more so since 1928, this showed all the adult members of the household, both male and female. However, unlike the census, they never show place of birth or details of children under the age of 18.
We can form a picture of the households as they evolve and when younger members of the family are entered in the register. We can assume they have reached voting age and therefore it is possible to calculate their approximate year of birth. Even more helpful from 1950 the register lists all those that will be become 21 during the coming year and from 1970, the birth dates of those who will become 18 that voting period. Even prior to 1918 the registers give a fairly precise indication of the family's property holdings- as long as they had the necessary voting qualifications.
So, to help us understand what information could be available, it might be useful to briefly consider how the right to vote changed over the years.

1865 electoral register for Higham, Kent shows Charles Dickens living at Gads Hill
​In 1832 voters were split into two categories - the County and the Borough voters. In the Counties the right to vote was restricted to those owning or having a life interest in land worth at least forty shillings a year. This right also applied to copyholders who held land from a manor worth at least £10 a year and those who had leases for more than 20 years on property worth at least £50 a year.
In the Boroughs the old voting rights were retained for the lifetimes of those concerned. To their number were now added householders paying a rent of at least £10 a year, provided that they had been in occupation for at least 12 months, paid poor rate and assessed taxes, and lived within seven miles of the Borough.
This Act defined a number of additional categories of voters, such as beneficed clergymen, irremovable schoolmasters, parish clerks and sextons, and certain classes of mortgagees, annuitants, trustees, etc. At this time many middle-class tenant farmers and shopkeepers gained the vote, but the artisan and agricultural labourer (and women of course) continued to be excluded.
In 1867 every household, whether owners or tenants who paid rates, as well as lodgers in unfurnished accommodation paying at least £10 a year were able to vote. In the Shires all males who had freehold, copyhold or leasehold property worth at least £5 per annum  and occupiers of lands or tenements whose rent was at least £12 a year now became eligible to vote.
In 1884 all male householders and occupiers of lands and tenements worth at least £10 and lodgers paying at least £10 a year were given the vote. The previous forty-shilling freehold rights were retained for inherited land, or that acquired by marriage, as were the rights of Freemen in Boroughs. Those who occupied a dwelling house by virtue of any office, service or employment could also now vote.
1918 saw the end of the property qualifications and the vote was given to men aged 21 and women aged 30, as long as they had resided or occupied business premises for six months of at least £10 a year. Women however had to be householders, the wives of householders or to have been to university.
An Act in 1928 gave the vote to all adults at the age of 21 and in 1969 the qualifying age was reduced from 21 to 18
​Where you can find Poll Books and Electoral Registers
Poll books can be found in County, Local Authority Record Offices or in a Local Studies library.
Look up the The National Archives’ Discovery catalogue  to see where they are held. There are large collections in the British Library, Guildhall Library, Bodleian Library, Institute of Historical Research and at the Society of Genealogists.

The Public Record Office of Northern Ireland holds many Irish Poll Books, which it has digitised and made available online.
Scottish Poll Books are more difficult to track down. Check the Scottish Archive Network

Search the Electoral Register on find My Past

Some of the poll books have been published by The Family History Partnership,

Many have been filmed by FamilySearch or are available on CD.